So! You're looking to buy a snow plow and are comparing plow styles, brands and costs. Which one is the best fit for you? Today we're going to compare the 3 main snowplow categories, along with their strengths and weaknesses, so YOU get the best plow for you.

Now - we're comparing NEW plows, but if you're looking to buy a used plow, this information will still be useful. However, you'll also want to read our OTHER article going over the 5 questions you'll want to ask BEFORE buying a used snowplow. 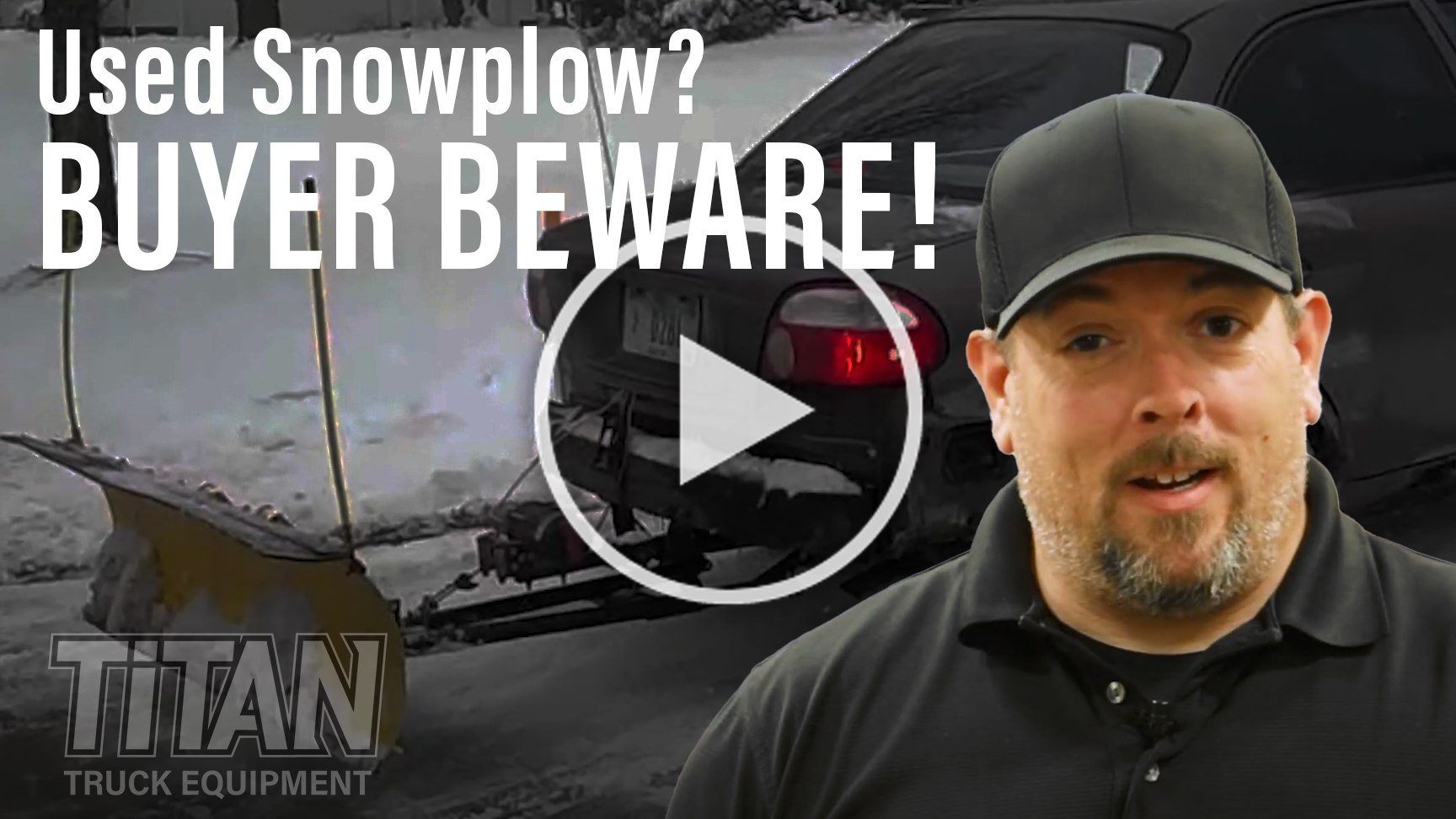 Okay - so here's the deal. Titan Truck has been selling plows for decades. We've sold, installed and serviced thousands of plows. What's more, many of us here at Titan have pushed our fair share of snow over the years as well, so what we're going to go over is based on a lot of experience.

As you probably know, there are really 3 types of snow plows: Straight blade, V-Plows and Expandable plows. Now toward the end we'll throw a wrench into this nice clean list with kind of a hybrid. But we’ll get there.

STRAIGHT BLADE plows are probably the most common. They've been around the longest and though they aren't the fanciest knife in the drawer, they just GET THE JOB DONE. Like all plow types, straight blades come in a variety of sizes and price points. You could use a quality straight blade plow for just about any application, however there are areas where they really shine.

The first is for plowing driveways. Straight blades are ideal for pushing snow over shorter distances. This is because with a straight blade, the longer the distance or deeper the snow, the greater the chance you'll need to do a 2nd or 3rd pass to clean up your spill over. Driveways are a bit more forgiving - since they are narrower than something like a large lot, time spent in clean-up is probably not as big of a deal. Also - this same principle makes them ideal for small parking lots, as you're typically not pushing snow over long distances, and clean-up is minimized.

Unless you add wings to your straight blade, you'll experience more spill-over than with other styles on large parking lots. While many commercial snow plow operators use straight blades, they're also ideal for light use or the first time buyer. They're less complicated to operate than a V-plow and require less time to get the hang of. Also, for the budget conscious, straight blades are the least expensive of the 3 main types of plows.

At the time this video was made, Titan Truck typically stocks the Pro, Pro Plus, HTS and Defender plows from Western, the Lot Pro and Drive Pro plows from Meyer, as well as the EX and MD plows from SnowDogg. Be sure to check with us after watching this video to see if we've added to or changed what we stock.

The 2nd style of snow plow is the V-PLOW. Okay - now V-Plows... they just LOOK COOL. So that should be reason enough to buy one, right? Okay maybe not.

The advantage of a quality V-Plow is it's VERSATILITY. A V-Plow is ideal for pushing snow over long distances, as you can turn the blades in and SCOOP the snow. Also, it's shape allows you to break through drifted or deep patches of snow. The fact that you can control each blade separately makes it extremely agile and a great choice for small parking lots as well. There might be times when you need to pull one blade in and direct the snow in a particular way. The V-plow is a great tool for this. V-Plows are great for commercial or personal use.

But they aren't for everyone.

First, V-plows are heavier than straight blades. There's just more metal and motor to deal with. This means some 3/4 ton and especially 1/2 ton vehicles cannot support a V-Plow. Also - if you have a V-Plow and you ARE pushing snow over long distances, you still may need wings to reduce roll-off. V-Plows are typically more expensive than straight blades, so they may not be ideal for a person on the tightest of budgets. That being said, they ARE worth the added investment if you are breaking through deep snow, need superior agility, and need the ability to maneuver in tight spots.

At Titan we typically stock Western's MVP plus, MVP 3 and Enforcer, Meyer's Super V3, and the VXF from SnowDogg." But as always - check with us first just to be sure. Who knows - maybe we've added to our stocking list!

That brings us to the last category of plows: EXPANDABLE BLADES. Or is that the last category…... I say that because there's kind of a hybrid we're going to throw in the mix, but let’s talk about expandable blades first.

Expandable plows are considered by many to be the Cadillac of snow plows. Or if you live in Germany - maybe the Mercedes-Benz? In any case, expandable blade plows allow you to move the maximum volume of snow over long distances. Expandable blades are definitely designed for professional use, but that's not going to stop us from selling you one for your driveway! …..if that's what you want. Seriously - professionals like expandable blades because they increase productivity - allowing you to push up to 40% more snow. This means fewer passes, with less time spent on clean-up, and more time adding profit to the bottom line. So expandable blade plows offer a better return on investment, allowing the pro to recoup his cost more quickly. Note though, expandable blades are the most expensive type of blades. So if you're on a tight budget and just need something to get the job done at the LEAST out of pocket cost - a straight blade or even V-Plow might be a better choice. And if you are a first time plow buyer or are new to plowing snow, they do take a bit more time to learn than something like a straight blade. That said - expandable blade plows really set the standard for productivity.

At Titan we currently stock Western's Wide-Out, and Wide-Out XL, Meyer's Super Blade, and the XP from Snow Dogg. Again - check with us after watching this video to get our most up-to-date stocking selection. And if there is a Western, Meyer or SnowDogg plow we DON'T stock, we can still get it for you.

Alright - AS PROMISED, we have to add one more plow style to the mix. Now, it's not really a category, but is a unique model. This is Western's Prodigy. This is a fixed-width plow with adjustable wings. It combines the benefits of a straight blade plow with the adjustability of an expandable plow, without the learning curve. It's just easier to operate. And, it costs a bit less than an expandable plow as well.

So there you have it. The 3….ish categories of plows compared. Each of the brands we've mentioned also have their strengths as well, and depending on your situation, one brand may work better for you than another. Simply call or contact us - we'll be happy to answer any of your questions. And if you're looking for a USED plow, you'll definitely want to watch Larry going through the questions to ask before committing.

We use cookies to provide and improve our services. By using our site, you consent to cookies. Learn more.